New York, NY, February 9, 2016 – New York human rights advocates today released a parody video of a Taylor Swift song that called for the pop star to publicly distance herself from Israeli diamond and settlement mogul Lev Leviev. Swift wore Leviev diamonds in photos in the September 2015 edition of Vanity Fair. The video release followed a Saturday afternoon musical protest at the Leviev diamond store in Manhattan in the run-up to Valentine’s Day, with protesters arriving for the third time in a row to find the store closed on one of the busiest shopping days of the year.

A number of organizations, governments and even Hollywood stars have severed ties with Leviev over his companies’ construction of illegal Israeli settlements on Palestinian land, and involvement in serious human rights abuses in Angola's diamond industry. In September seven organizations wrote to Taylor Swift asking her to publicly renounce Leviev. Ms. Swift and her team did not respond to the emailed letter and multiple follow-up phone calls. The video parodies Taylor Swift’s song “Shake It Off” and was recorded in part at the Saturday protest at Leviev. The lyrics say, “Lev is abusing, but we’ve made him stop cruising. With our boycott we’re moving, for human rights.” The protesters call on Swift to “join us” in boycotting Leviev.

On Saturday, 45 people protested outside the Leviev store, singing and holding Valentine-themed, heart-shaped signs saying “Leviev Breaks Palestine’s Heart,” “Palestine is Forever,” “Won’t You Be Just,” plus “Taylor Swift, Shake Off Leviev Dimaonds.” A piece of paper posted on the store’s door claimed the store was closed that day “due to inventory.” The store was also closed for Adalah-NY’s holiday caroling protests in December 2014 and December 2015. Leviev’s staff claimed the store was closed for the December 19, 2015 protest due to “a plumbing issue from the construction site next door.” 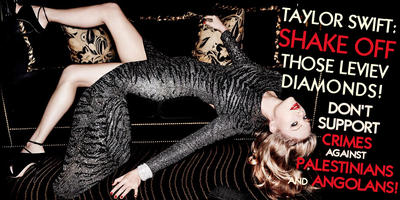 Hani Ghazi of Adalah-NY commented, “For the third consecutive time that we have protested here on the busiest shopping Saturdays of the year, the Leviev store was closed. We’re confident this is no coincidence, but is yet another sign of the power of the growing global movement for boycott, divestment and sanctions targeting Israel.”

One passerby began screaming at the singing protesters, ripped the phone from the hands of a Palestinian member of Adalah-NY who was recording his tirade, and threw the phone 30 feet down the street (see video).

Since Leviev’s construction of settlements for Israeli Jews furthers inequality, a member of Adalah-NY also read the crowd stories of “Love Under Apartheid,” about Palestinians who dare to defy Israel’s apartheid policies with love.

Leviev’s companies - Africa Israel, and Leader Management and Development - have built thousands of homes for Israeli settlers on Palestinian land in the Israeli-Occupied West Bank in violation of international law. Murky reports have emerged in Israeli media about whether Leviev’s involvement in settlement construction through Africa Israel, and Leader Management and Development could be ending. However, this remains unconfirmed, and the thousands of settlement homes, built for Israeli Jews only, remain on Palestinian land.

In the diamond industry in Angola, Angolan security companies guarding Leviev’s operations have been accused of acts of “humiliation, whipping, torture, sexual abuse, and, in some cases, assassinations.” In 2014, a video was posted of private Angolan security forces working for the Leviev-owned mine Luminas torturing community members.

The protest came as criticisms of Leviev’s real estate developments in New York City are making headlines. Leviev agreed in January to a settlement in suits over accusations of “ripping off NYC condo buyers,” but another Leviev company remains embroiled in lawsuits with an ex-partner in gentrification projects in Harlem and Washington Heights.

The government of Norway, Oxfam America, UNICEF, CARE, the government of the United Kingdom, and New Zealand’s Superannuation Fund have all distanced themselves from Leviev’s companies over their human rights record. Oprah Winfrey also wore Leviev diamonds in the May 2015 issue of O Magazine. She has not responded to calls to publicly distance herself from Leviev.