More Deaths and Injuries from US Tear Gas in Palestine, around the Middle East, and in Oakland

In response, human rights advocates will protest again on Martin Luther King Jr. Day, January 16th, 2012, outside CSI's Jamestown, Pennsylvania headquarters (see past Protests against Israel's tear gas use). In advance of the protest, reports indicate that CSI has replaced the Israeli flag that previously flew alongside the US flag outside its headquarters with a Pennsylvania state flag.

Strong evidence that CSI canister killed Palestinian protester Mustafa Tamimi: On December 9, 2011, in the village of Nabi Saleh in the West Bank an Israeli soldier inside an armored military jeep fired a tear gas canister at close range directly at the face of Palestinian protester Mustafa Tamimi during a protest against the expansion of Israeli settlements on Nabi Saleh’s land. Mustafa died from his wounds the next day. Protesters did not manage to collect the actual tear gas canister fired at him. However, residents of Nabi Saleh have collected samples of the types of tear gas canisters that the Israeli army uses against Nabi Saleh’s weekly protests, including the specific type of tear gas canister - same size and shape - that hit Mustafa. The type of canister that killed Mustafa can be seen in the January 11 and 13, 2012, photos below taken in Nabi Saleh by Bilal Tamimi. The canister has a headstamp on it that reads CTS. CTS stands for Combined Tactical Systems, a brand name of Combined Systems Inc., in Jamestown, PA. Adalah-NY received these photos from the Popular Struggle Coordination Committee.

Across the Country, People Are Rising Up to Fight for Change

Actions for justice are taking place all over the country, including some in which Adalah-NY and others have participated against CSI, a tear gas manufacturer whose products have been involved in the deaths of activists in the Occupied Palestinian Territories and elsewhere in the Middle East.

As of February 16th, 2011, 590 people have responded to this action alert by sending emails to the State Department calling on the US government to stop using US tax dollars to provide tear gas and other weapons, and to stop approving military sales to repressive governments like Egypt, Israel and Tunisia that use US equipment and weapons to deny basic human rights.

Also, 526 people have sent emails to Combined Systems Inc, Point Lookout Capital Partners and the Carlyle Group demanding that CSI stop providing tear gas that is used by repressive governments like Egypt, Tunisia and Israel to deny the right to protest.

Egyptians, Americans and people worldwide have been outraged in the last days by the photos, twitter messages and news articles showing that the tear gas canisters fired by Egyptian police at peaceful, pro-democracy protesters in Egypt are “Made in USA.” While we are seeing these pictures now from Egypt, we have seen similar ones in recent months from Tunisia and Palestine. All three places have had in common repressive governments, armed by US companies with tear gas and other weapons. All three have used extreme violence against unarmed protesters who were demanding basic human rights, maiming and even killing protesters with impunity.

In all three places, Combined Systems Inc., a US company based in Jamestown, Pennsylvania, is providing the tear gas - often under its brand-name CTS, an acronym for Combined Tactical Systems - that these governments are employing to crush protest, deny human rights and cling to power.

Israel, Egypt and Tunisia’s CSI tear gas may have been supplied under the US’s massive military aid to these governments, despite those governments’ clear records of severe human rights abuses. Israel receives $3 billion in US military aid annually, and the State Department approved the commercial sale of $1.85 million of "tear gases and riot control agents” to the Israeli government from 2007-2008. Egypt receives $1.3 billion in military aid annually, and Tunisia has received an average of around $15 million annually. At a minimum the US State Department has reviewed and approved the sale of US-made tear gas to those governments. 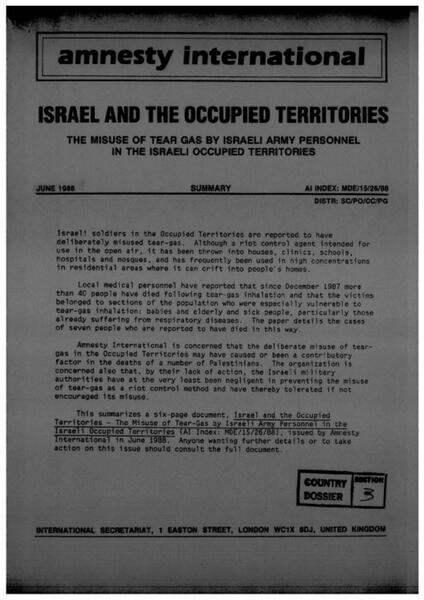 New York, NY  – Thirty-five protesters gathered during the lunch hour today outside the midtown Manhattan offices of Point Lookout Capital Partners, a New York firm that facilitates investment in Combined Systems Inc. (CSI). CSI, based in Pennsylvania, sells tear gas to the Israeli army that the Israeli army has then used to kill and seriously injure a number of unarmed protesters in the Israeli-occupied West Bank, including on January 1, 36-year-old Jawaher Abu Rahmah from the village of Bil’in.

Dave Lippman from Adalah-NY explained, “The Israeli military is using tear gas manufactured by CSI and financed through Point Lookout Capital as a weapon to crush the growing unarmed protest movement against Israel’s illegal confiscation of Palestinian land for Israeli settlements. We as US taxpayers may be paying for some of the tear gas that Israel is shooting at Palestinian, Israeli and American protesters. The US government needs to stop providing deadly aid, and CSI and Point Lookout need to end their complicity in Israel’s violent repression of legitimate protest.”

On January 1, 2011, 36-year-old Palestinian Jawaher Abu Rahmah from the West Bank village of Bil’in died at a hospital from the effects of tear gas inhalation suffered at a protest the previous day against 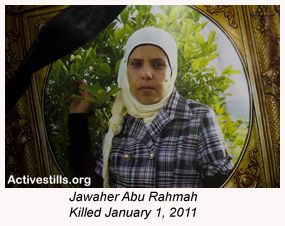 Israel’s construction of a wall and settlements on Bil’in’s land. Jawaher is only the most recent protester killed or seriously injured by tear gas fired by the Israeli military. For example, Jawaher’s brother Bassem, was killed almost two years ago, and two US citizens, Tristan Anderson and Emily Henochowicz were injured in 2009-2010.

Much of Israel’s tear gas is provided by the US company Combined Systems Inc. (CSI) located in Jamestown, Pennsylvania. The letters CSI, or CTS, a CSI brand name, are marked on many of tear gas canisters that litter Palestinian villages after they protest. The Israeli military is using CSI’s tear gas as a weapon as it tries to crush the growing movement of unarmed protest against Israel’s illegal confiscation of Palestinian land for Israeli settlements. Even more disturbing, you as a US taxpayer may be paying for at least some of the tear gas that Israel is shooting at Palestinian, Israeli and international protesters. The US government provides $3 billion annually in military aid to Israel,

Adalah-NY: The New York Campaign for the Boycott of Israel (adalahny.org)

The US Campaign to End the Israeli Occupation (www.endtheoccupation.org)

As US groups committed to justice and peace, we are writing to ask that Combined Systems Inc. cease providing CSI equipment to the Israeli government in response to the Israeli military’s ongoing and foreseeable misuse of CSI crowd control equipment to kill and maim protesters in the Occupied Palestinian Territories. The Israeli military has demonstrated a pattern of misuse of your equipment, directly leading to the death and injury of unarmed demonstrators in the Occupied Palestinian Territories. Over the last two years alone, the Israeli military has used your products to kill two peaceful protesters from one family in the West Bank village of Bil’in, to severely injure two peaceful protesters from the US, and to seriously injure many more. According to the the Israeli human rights group B’Tselem, two other Palestinians were killed by Israeli tear gas in 2002.[1]

On January 1, 2011, a 36-year-old Palestinian woman, Jawaher Abu Rahmah from the West Bank village of Bil’in, died in a hospital from the effects of tear gas inhalation suffered at a protest the previous day 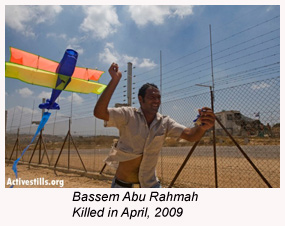 against Israel’s construction of a wall and settlements on Bil’in’s land.

Jawaher’s brother Bassem Abu Rahmah was killed in April 2009 when he was hit in the chest with an extended range CSI tear gas canister fired directly at him by an Israeli soldier during a peaceful protest in Bil'in.

Much of Israel’s tear gas is provided by the US company Combined Systems Inc. (CSI). The Israeli military is using CSI’s tear gas as a weapon in its effort to crush the growing movement of unarmed protest against Israel’s illegal confiscation of Palestinian land for Israeli settlements. Even more disturbing, you as a US taxpayer are paying for at least some of the tear gas that Israel is shooting at Palestinian, Israeli and international protesters. For more information please see Adalah-NY’s ACTION ALERT: Tell CSI to Stop Sending Tear Gas to Israel.

Come protest at Point Lookout Capital, the majority stockholder of CSI. Adalah-NY will be leading a reenactment of the killing of Jawaher, as well as moments of silence and flyering.