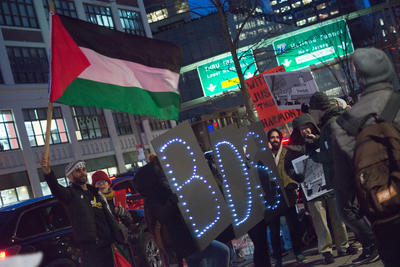 The protest was organized by Adalah-NY and Columbia Apartheid Divest for the 2017 International Israeli Apartheid Week which promotes the Palestinian-led, global campaign to carry out boycott, divestment and sanctions (BDS) initiatives against Israel until it complies with international law by ending its occupation and colonization of Palestine and apartheid policies. It came amidst ramped-up government repression of the BDS Movement worldwide. On Sunday Israel detained one of the founders of the BDS Movement, Omar Barghouti, and questioned him about fabricated charges. In New York, the state legislature has fast-tracked three bills to penalize those who boycott Israel.

Patrick Connors from Adalah-NY explained, “We came out to protest because Idan Raichel cannot be allowed to sell himself as a progressive ‘World Musician’ while praising the Israeli army and participating in Israeli government PR efforts. The movement for Palestinian rights and BDS campaigns to hold Israel accountable for systematic violations of fundamental Palestinian rights are growing worldwide because they are just and effective. And they will not be stopped by government repression or bad weather.” 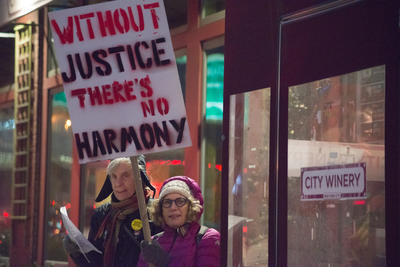 In June 2016 Raichel headlined the Israeli Consulate’s Israeli Independence Day celebration in NYC, and said he was honored to and would continue to play concerts for the Israeli army, which terrorizes Palestinians and enforces Israel’s apartheid regime. In 2015, he headlined a concert organized by Israel’s Ministry of Foreign Affairs in Italy, and performed to welcome American Jews who had just arrived in Israel to enlist in the Israeli army. Raichel performed for the Israeli army before, during and after its August 2014 attack on Gaza, which killed over 2100 Palestinians, including 500 children. In a statement endorsing the right-wing US non-profit Thank Israeli Soldiers, he said that supporting Israeli soldiers “is a fulfillment of the Jewish ideal.” His 2013 tour of Africa “was initiated and produced by the Israeli Foreign Ministry and Israeli embassies in Africa.”