Submissions for this form are closed. 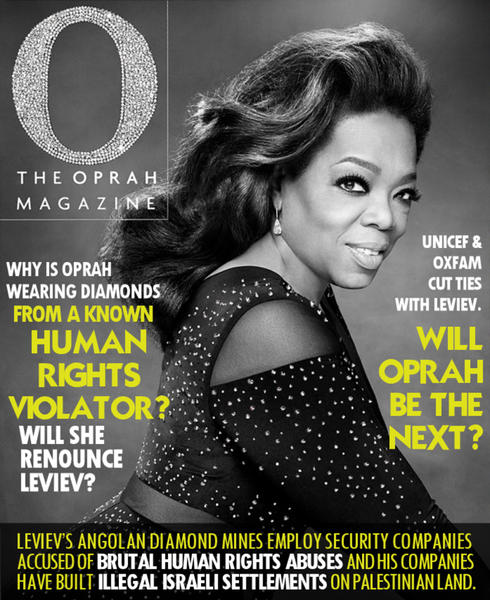 US megastar and social justice philanthropist Oprah Winfrey wore diamond earrings made by Israeli billionaire Lev Leviev on the cover of the May 2015 edition of O, the Oprah Magazine. She wore the earrings despite the fact that Leviev’s companies have been involved in brutal human rights abuses in the diamond industry in Angola and in the construction of Israeli settlements on Palestinian land. On May 29, Adalah-NY emailed the letter below, signed by nine organizations and 34 individuals from the US, Palestine, Israel and South Africa to: Ms. Winfrey; Sheri Salata and Eric Logan, Presidents of the Oprah Winfrey Network (OWN); Lucy Kaylin, Editor in Chief of O; and Gayle King, Editor at Large of O. The letter calls on Ms. Winfrey to demonstrate that she does not support Leviev’s abusive business practices by publicly distancing herself from his companies. Following email exchanges and phone calls between letter signers and executives from O and OWN over the course of more than three weeks, Ms. Winfrey’s representatives have failed to provide a promised response to the letter.

Please join the call for Ms. Winfrey to support the human rights of Angolans and Palestinians. Fill out and submit the form on the right in order to sign the letter and email a copy to: Chelsea Hettrick, Communications Director at OWN; Lucy Kaylin, Editor in Chief of O; and Karla Gonzalez, Assistant to Lucy Kaylin at O.

Thanks for your support!

Letter Sent to O and to the Oprah Winfrey Network

Because we greatly appreciate your commitment to racial, social and economic justice in the United States and worldwide, we are writing to alert you to an instance where your inadvertent actions threaten to undermine those principles. On the cover of the May issue of O, The Oprah Magazine you were featured wearing earrings from Leviev. We’re confident that you were not aware that security companies employed by billionaire Lev Leviev in Angolan diamond mining communities have been credibly accused by one of Angola’s most courageous human rights activists of committing brutal human rights abuses against Angolans, and that other Leviev companies have built thousands of Israeli settlement homes on Palestinian land in the Israeli-occupied West Bank in violation of international law.

As a result of awareness-raising campaigns by activists about these human rights abuses committed by Leviev’s companies, UNICEF, Oxfam America, the British and Norwegian governments and New Zealand’s pension fund are among many organizations that have severed ties with Leviev’s companies. We also have not noticed a major star wearing Leviev diamonds since 2008, following similar educational efforts with celebrities.

You have deservedly earned a great deal of credibility by supporting and starring in films like Selma, creating Oprah’s Angels Network, supporting Katrina relief efforts, and underwriting the Oprah Winfrey Leadership Academy in South Africa. Your wearing of Leviev’s diamonds on the cover of O, The Oprah Magazine was picked up by E!Online, Huffington Post, and other media outlets. We fear that this publicity conveys to your peers and to the public your implicit endorsement and promotion of Leviev’s companies. For this reason, we urge you to carefully review Leviev’s companies’ record. We’re confident that after you do, you will want to correct this misunderstanding and distance yourself from Leviev’s companies.

In Palestine, since 2000, Leviev’s company Africa Israel, its construction subsidiary Danya Cebus, and Leviev’s company Leader Management and Development have built thousands of settlement homes in the Israeli settlements of Adam, Ma’aleh Adumim, Har Homa, Mattityahu East, Gilo and Zufim in the Israeli-occupied West Bank. In West Bank Palestinian villages including Jayyous and Bil’in, Leader Management and Development and Africa Israel built Israeli settlements on the agricultural land that Palestinian residents depended on for their livelihoods. Even today Jayyous’ farmers are fighting in court against the seizure of additional village farmland for the continued expansion of Zufim settlement. All Israeli settlements violate international law and impoverish Palestinian communities by seizing vital land and resources and trapping Palestinians in isolated bantustans.

Providing another example of the terrible impacts of Israeli settlements, Human Rights Watch’s recent report "Ripe for Abuse: Palestinian Child Labor in Israeli Agricultural Settlements in the West Bank" describes abuses against Palestinian children as young as 11 years old, who work in Israeli settlements. The report quoted one child worker as saying "If you sit down while you’re working with peppers or grapes the supervisor will come and tell you to stand up and not take a break." In the accompanying video report, researcher Bill Van Esveld said that "Some of the children ... come from villages where their families used to have their own land farms, and the same land farms has been taken over and given to settlement farmers. They have no option to work on Palestinian farms. Most of [these farms] don't exist any more.”

Africa Israel and Danya Cebus’ settlement construction were twice carefully investigated (1st and 2nd) by the Norwegian Government, leading to decisions by the Norwegian Government to exclude those companies from Norway’s Government Pension Fund Global (GPFP). Leviev has also donated to Israeli settlement organizations like the Land Redemption Fund that aim to further Israeli settlement expansion. In the last months, perhaps in an effort to dampen global boycotts, murky information has emerged about his companies’ current involvement with settlements. In October 2014, Israeli media reported a claim that has not been confirmed by Africa Israel that the company plans not to build any more settlements. There are also unconfirmed reports that Leviev’s company Leader Management and Development may have sold its ownership of the settlement of Zufim to an unidentified foreign entity. However, Leviev’s companies have made no clear public statements about their actions and intentions, nor taken any steps to undo the large-scale damage resulting from their settlement construction.

Angola may well be the source of the diamonds in the earrings that you wore. In the diamond industry there, Leviev is a close partner of the corrupt and autocratic Dos Santos regime. Private security companies working for Leviev’s diamond mining companies were accused in 2006 and 2007 by the courageous Angolan human rights activist Rafael Marques de Morais of terrible human rights violations, including “humiliation, whipping, torture, sexual abuse, and, in some cases, assassinations.” In 2014, Rafael Marques de Morais documented in a video yet more brutality by the Angolan private security company working for Leviev.

Due to his relentless exposure of the terrible human rights abuses that are endemic to Angola’s diamond industry, Rafael Marques de Morais was threatened with nine years of imprisonment in a high profile a lawsuit brought by Angolan Generals over Marques de Morais’ 2011 book documenting the severe human rights abuses committed by the Angolan diamond security companies owned by the Generals. Angola’s efforts to prosecute Marques de Morais for human rights reporting were the subject of broad international condemnation and widespread media coverage, pressuring the Generals to drop the lawsuit. The Angolan government prosecutor, however, continued prosecution of Marques de Morais, and he was convicted of malicious prosecution and given a six month suspended sentence that can be implemented any time in the next two years. Leviev’s companies were not a major focus of Marques de Morais’ 2011 book, but Leviev’s companies remain central players and partners of Angola’s government in the country’s corrupt and exploitative diamond industry.

Given your strong record of support for social justice, we feel certain that you did not intend to convey support for Leviev’s companies, with their terrible human rights records. Now that you are aware of this information, we urge you to take steps to ensure that your peers and the public are not left with the understanding that you have endorsed and lent your credibility to Leviev’s companies.

We would greatly appreciate the opportunity to meet with you to provide further background on these issues.