Demo against The Hebron Fund, Nov 16, 2010 from Cinema Palestina on Vimeo.

Video, Stand Up Against Hebron Settlers 2010

The Hebron Fund has scheduled the “Hebron Aid Flotilla,” a pleasure cruise to raise funds for illegal Israeli settlements in occupied Hebron, Palestine.

Such settlements are one of the main obstacles to peace in the region. Hebron has also been the site of some of the most egregious and racist attacks on Palestinian civilians – men, women and children. There will be a silent picket in protest against the fundraiser. 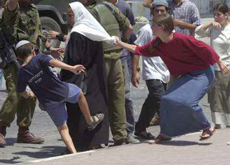 Hebron is a West Bank Palestinian city of 150,000 where 500 Israeli settlers are backed up by thousands of soldiers from the Israeli Army.

Human Rights organizations have documented regular physical violence against Palestinians and destruction of their homes and fields by settlers trying to drive them out of their land.

By supporting the growth of such settlements, the Hebron Fund is violating international law, as well as the Obama administration’s call for a freeze on new settlements in the Occupied Palestinian Territory.

Please join us in protesting the Hebron Fund's annual fundraiser dinner supporting the illegal settlement movement that is displacing and brutalizing Palestinians.