New Yorkers March to Demand End of Massacres in Gaza and Boycott of Israel, 12/29/2008

Adalah-NY: The Coalition for Justice in the Middle East
Media Contacts: info@adalahny.org

New York, NY – For the second day in a row, over a thousand New Yorkers marched through midtown Manhattan, chanting and carrying signs and Palestinian flags, to voice opposition and demand an end to Israel's assault on Palestinians in the Gaza Strip. In the last three days, Israel's bombing of Gaza has killed over 360 Palestinians. Reports indicate that at least 60 of those killed were women and children.

The Monday evening protest, which drew a diverse and noisy crowd of more than a thousand as well as substantial media, began at 5 PM with leafleting and chanting at Union Square and Herald Square. The energy grew during a symbolic funeral procession for Gaza's dead from Herald Square to Bryant Park, as marchers carried aloft two stretchers covered in black shrouds and flags, similar to those used in Palestinian funeral processions. The march culminated with loud chanting at the Israeli Consulate at 8:30 PM. It comes on the heels of a Sunday afternoon Manhattan march that drew over two thousand protesters, and will be followed by a Tuesday evening protest at the Israeli Consulate beginning at 5 PM. 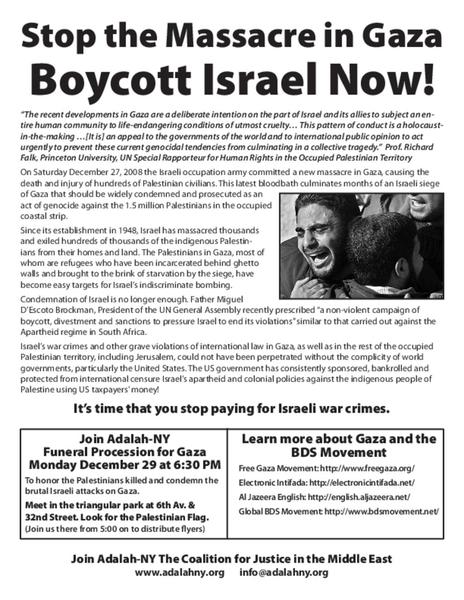 Join Adalah-NY Monday, Dec 29th as we raise awareness of and
protest Israel’s attacks against Gaza and ongoing war crimes.

Adalah-NY will be leafleting on Monday, from 5:00 to 6:00 at Union Square and 2 blocks south of Herald Square. We will then meet up at 32nd St. for a funeral procession up 6th Ave to Bryant Park.

We will be posting our flier to our website, www.adalahny.org by tomorrow morning. It will be both an informational flier and will announce the funeral procession. We encourage all concerned organizations and individuals to distribute the flier widely to the general public and to join the procession on Monday at 6:30.