The IPO, a self-proclaimed “cultural ambassador” representing the state of Israel, orchestrates a positive image of Israel to divert attention from its human rights abuses, as part of the “Brand Israel” initiative launched in 2006. An Israeli Foreign Ministry official explained Israeli government efforts to rebrand Israel through the arts in 2009, saying, “We will send well-known novelists and writers overseas, theater companies, exhibits” to “show Israel’s prettier face, so we are not thought of purely in the context of war.” The IPO website proudly states that the Orchestra “represent[s] the State of Israel across the world.” 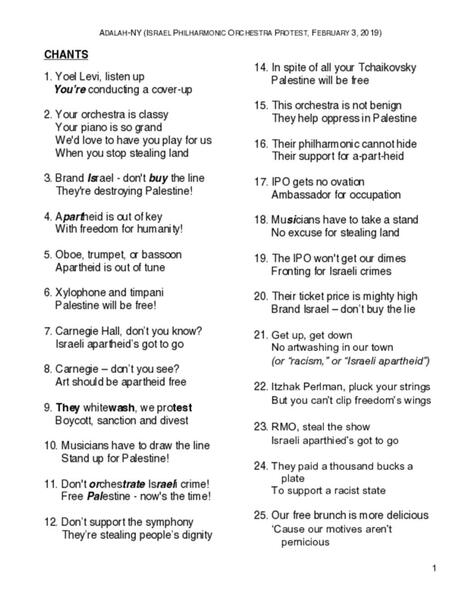 An anti-Israel organization staged a protest against the Israel Philharmonic Orchestra (IPO) on Sunday.

Adalah- NY, an organization that campaigns for the boycott of Israel, raised signs and carried cardboard guitars that read “apartheid” while chanting against Israel outside New York's Carnegie Hall, causing a small disturbance on February 3. The protesters stood outside a fundraising brunch for the IPO, which was followed by a performance.

Dozens of protesters got the Israel Philharmonic Orchestra’s weeklong tour of the United States off on a sour note.

The demonstrators from Adalah-NY, the New York Campaign for the Boycott of Israel, carried signs and chanted outside of Carnegie Hall in New York during a fundraising brunch on Sunday that was followed by a performance.

The Times of Israel

Dozens of anti-Israel demonstrators gathered outside New York’s prestigious Carnegie Hall on Sunday to protest a performance by the Israel Philharmonic Orchestra.

The demonstration was organized by Adalah-NY, a group that supports the Boycott, Divestment and Sanctions movement against Israel.

A few dozen BDS supporters, rallied by the Adalah network, staged a mostly good-natured protest outside Carnegie Hall yesterday while the Israel Philharmonic gave a concert inside.

Dozens of supporters of the movement calling to boycott Israel gathered in New York on Sunday in protest an Israel Philharmonic Orchestra concert at the city's prestigious Carnegie Hall.

Protesters distributed flyers with the message “Don’t harmonize with apartheid: While Palestinians hunger for freedom, New York’s elite feasts in support of Israel’s oppressive policies,” referring to the festive pre-show brunch organized for the occasion. 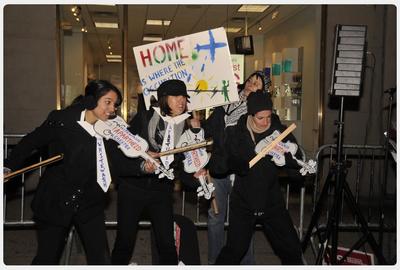 New York’s elite feast for Israeli apartheid, while Palestinians hunger for freedom
On the afternoon of Sunday, February 3, New York's Carnegie Hall will host an outrageously expensive fundraising brunch for the Israel Philharmonic Orchestra (IPO), followed by an IPO concert performance. Tickets for the IPO brunch start at $1000. The IPO is no apolitical cultural institution. An official cultural ambassador for Israel, the IPO proudly proclaims that it "represent[s] the State of Israel across the world,” and says that “[T]he goodwill created by these tours…is of enormous value to the State of Israel.”  While the IPO performs as part of the Brand Israel PR initiative, Israel systematically deprives Palestinians of their basic rights, whether they live under Israeli military occupation, as unequal citizens in Israel, or as refugees, denied their right of return to their homeland.

As the IPO’s wealthy supporters attend a lavish brunch inside to sustain its whitewashing of Israeli apartheid, we’ll be outside sustaining our love of justice with a small Palestinian brunch and songs for freedom.  Our protest responds to the Palestinian civil society call to boycott cultural institutions like the IPO that are complicit in sustaining Israel’s apartheid rule over the Palestinian people.  Join us! Signs and brunch will be provided.