Photos, Criminalization of Home: Organizing to Protect Communities from NYC to Palestine

Video, Criminalization of Home: Organizing to Protect Communities from NYC to Palestine

Clips from The Criminalization of Home: Organizing to Protect Communities from NYC to Palestine

"Permanent exclusion" from NYC to Palestine 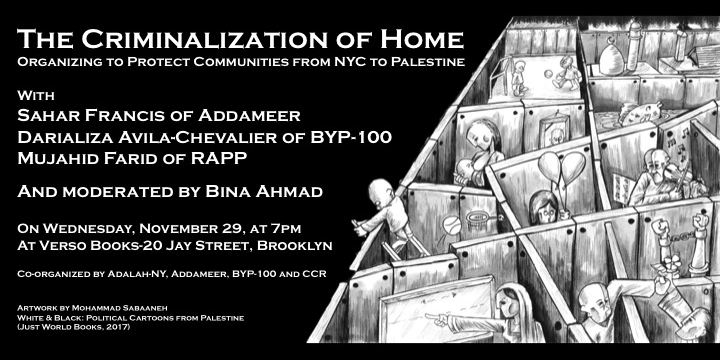 This panel explores the different ways criminalization fractures communities and separates people from the place(s) they call home. Bringing together activists from New York City to Palestine, it looks at how state violence enforces a system of racialized dispossession, whether through eviction, deportation, incarceration, or colonization and ethnic cleansing. We'll also learn how people are protecting their communities by fighting back against the increasingly militarized policing of their neighborhoods, supporting prisoners' rights, and advancing a vision of freedom and self-determination.

Darializa Avila-Chevalier is an organizer with the NYC chapter of Black Youth Project 100, a member-based organization of radical 18-to-35-year-old people that work toward the liberation of Black people. BYP100 works to center the most marginalized, which includes incarcerated people and trans/gender non-conforming people. Their work is done via direct action, political education, and internal leadership development. Their current long-term project is Campaign H.O.M.E. (Housing Over Monitoring and Evictions), which seeks to end the racist NYCHA policy of Permanent Exclusion. Before joining BYP100, Darializa organized with Students for Justice in Palestine and helped launch the Columbia University Apartheid Divest campaign.

Mujahid Farid is the Lead Organizer for the Release Aging People in Prison Campaign (RAPP), which aims to decarcerate US prisons by accelerating the release rate of elderly people. Farid himself was confined for 33 years in New York State and released in 2011, after entering the system in 1978 with a sentence of 15 years to life. While confined, Farid earned four college degrees, including two Master’s, and was part of a trio that created the first HIV/AIDS peer education program in NYS prisons, which later developed into the widely acclaimed PACE (Prisoners AIDS Counseling & Education) program. In 2013 he was awarded an Open Society Soros Justice Fellowship, a joint NYS legislative commendation, and a Citizens Against Recidivism, Inc. award for social activism. In 2016 RAPP was awarded the New York Nonprofit Media’s Cause Award.

Sahar Francis has been the director of Addameer (Arabic for conscience), a prisoner support and human rights advocacy organization, since 2005, and has been a human rights legal advocate since 1994. She specializes in issues of Palestinian political prisoners, including ill treatment and torture, administrative detention, prison conditions, and prisoners' rights. She has extensive litigation experience in the Israeli military court system as well as in Israeli civil courts.