Rabbi Shmuley Boteach tells crowd: “Down with the Palestinians"

Hannah Mermelstein from Adalah-NY commented, “Leviev’s billions have come from exploiting Palestinian and Angolan communities. So today we celebrate because it seems our years of holiday wishes have come true: Leviev’s store is empty.” 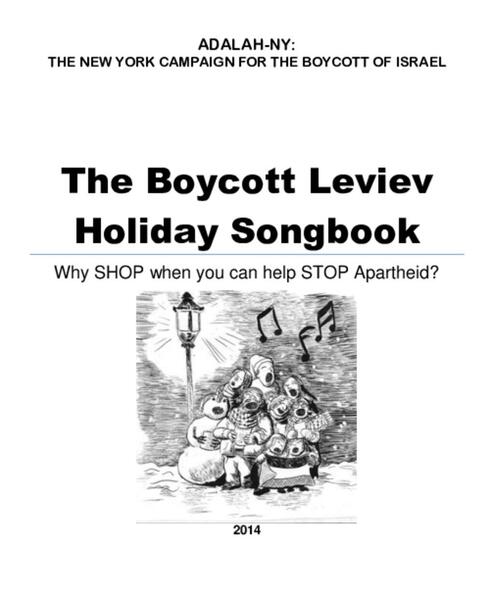 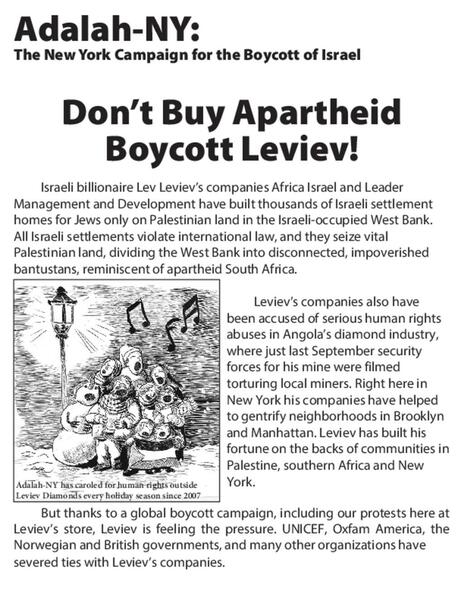 Rightwing rabbi Shmuley Boteach writes in the Jerusalem Post that “Israel haters… follow my trail on the Internet like dogs in heat.” But Boteach seems to seek the attention: his latest encounter with critics of Israel was on Madison Avenue last Saturday, when he approached protesters outside a store associated with an Israeli business in the occupied West Bank and taunted the group by loudly celebrating Israel and denouncing Hamas. His children joined in his chants.

Why we boycott Lev Leviev’s Companies
The companies of Israeli billionaire Lev Leviev have built thousands of homes for Israeli settlers on Palestinian land in the West Bank in violation of international law. But Leviev’s companies are feeling pressure, thanks to a seven-year international boycott campaign, including this, our eighth consecutive year of holiday caroling at Leviev’s Manhattan store. Israeli media report that Leviev’s company Africa Israel again made statements about ending their settlement construction, while even angry Israeli settlers don’t know if Leviev quietly sold his stake in his other settlement company, Leader Management and Development. In Angola, security companies for Leviev’s diamond mining company have yet again been accused of torturing and brutalizing poor Angolan communities.

Why we support the BDS Movement
Adalah-NY is part of the Palestinian-led movement for Boycott, Divestment and Sanctions (BDS) against Israel that is modeled on the global campaign that helped to bring an end to apartheid in South Africa.