New York NY, July 12, 2014—On the evening of July 11, 400 New Yorkers gathered at Union Square in lower Manhattan to protest the escalation of Israel’s ongoing violence against Palestinians, and to reaffirm their support for the Palestinian call for Boycott, Divestment, and Sanctions (BDS) against Israel until it complies with international law. (photos)

As of early morning on Saturday, July 12, the Palestinian Centre for Human Rights (PCHR) in Gaza reported that Israeli attacks on the Gaza Strip had killed 114 Palestinians—of whom 94 were civilians, including 26 children and 18 women. 799 others had been wounded, mostly civilians.

Activists handed out fliers to passersby and held signs and banners expressing sorrow and outrage over the attacks on Palestinians, and urging international solidarity in the form of BDS. Dozens of protesters wore signs each bearing the name of a Palestinian killed by Israel in Gaza over the last days. Marching down Broadway south of Union Square through Friday evening traffic, the group called out chants including, “Gaza is under attack! What are you gonna do? Stand up, fight back!” and “BDS - heed the call, fight for justice...for all!” 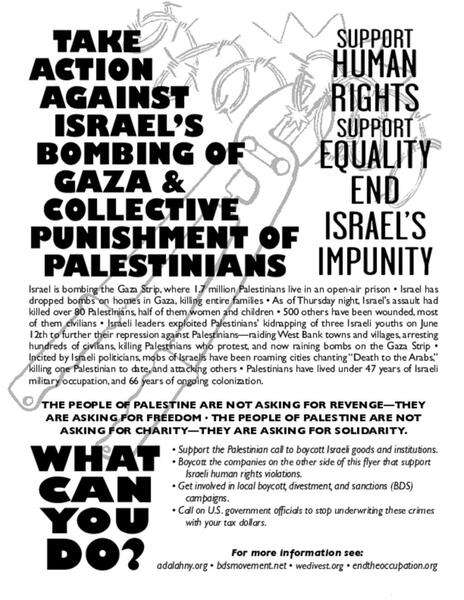 Where: Union Square, south side of square, near Broadway

Why: In response to the escalation of Israel’s ongoing violence against Palestinians, the Bil’in Popular Committee has called for an international day of action on July 11. Palestinian students from the Gaza Strip have called for international support in ending the Israeli military assault on the besieged Gaza Strip, and for Boycott, Divestment and Sanctions campaigns targeting Israel.

As of Thursday night, Israel’s assault had killed over 80 Palestinians, half of them women and children. 500 others have been wounded, most of them civilians. Israel is bombing Palestinian homes in Gaza, killing whole families, a war crime according to PCHR in Gaza.

Join us as we bear witness to the lives lost in Israel’s most recent assault and heed Palestinians’ call to support their struggle for freedom and justice through boycott, divestment, and sanctions (BDS) campaigns.

In particular, we’ll highlight the boycott of nearby Max Brenner Chocolate Bar, whose parent company, the Strauss Group, boasts of its support for Israel’s Golani and Givati Brigades. Both brigades have long records of human rights abuses and were heavily involved in Operation Cast Lead, Israel’s 2008–9 assault on Gaza that killed approximately 1,400 Palestinians, including 350 children.

Other actions in NYC:

Actions you can take on-line: