Video: BDS Breaks Through as Israel Continues Attacks on Palestinians

BDS Breaks Through as Israel Continues Attacks on Palestinians

Boycott, Divestment and Sanctions (BDS) Breaks through in New York as Israel Escalates Attacks on Palestinians

The protestors spoke out against the current onslaught of Israeli military and settler violence against Palestinians, and vowed to intensify BDS campaigns targeting Israel, with the aim of ending Israeli apartheid and occupation. Since Monday, Israeli bombs have killed 40 Palestinians, including 13 children, in the Gaza Strip alone. 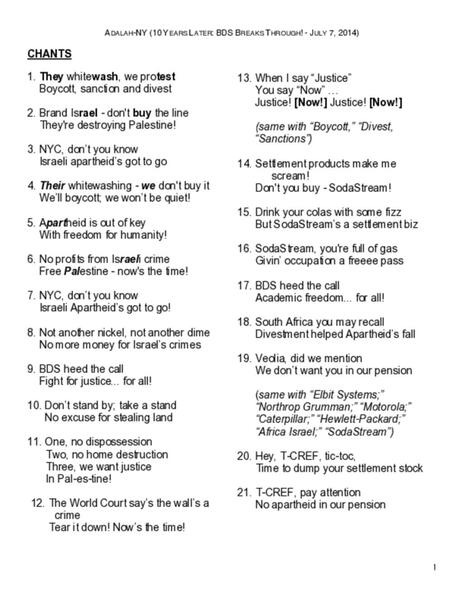 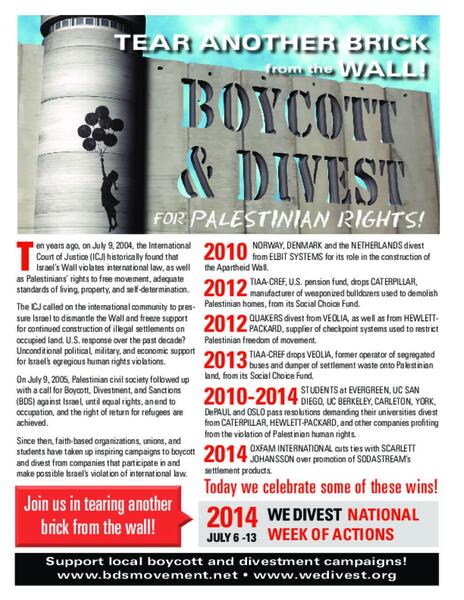 Despite cracks, Americans remain with Israel

While voices critical of Israel have grown louder in the US in recent years, a survey published this week revealed that Americans remain steadfast in their support for the Jewish state amid its latest conflict with Palestinian militants.

But while numbers remain largely unchanged, some of those on the pro-Palestinian side are becoming increasingly louder in expressing their opposition to Israel’s actions against its neighbour.

As Israel continues to carry out violent attacks against the Palestinian people, including killing of civilians, raids of academic institutions, and attacks on Gaza, come out to support the growing global BDS movement that aims to hold Israel accountable. Come out and join Adalah-NY and our allies as we bring the BDS movement to the streets of NY for the 9th anniversary of the 2005 Palestinian call for Boycott, Divestment and Sanctions against Israel!

Come out to mark the 10th anniversary of the International Court of Justice advisory opinion calling on the international community to hold Israel accountable for building the Wall and settlements on occupied Palestinian land in violation of international law.

Come out to mark 9 years of successful global boycott and divestment initiatives being carried out to end Israeli apartheid, occupation, and colonization including the recent historic decision by the Presbyterian Church to divest $21 million from Hewlett-Packard, Motorola Solutions and Caterpillar.

Come out to participate in the We Divest National Week of Action July 6 – 13.

COME OUT TO TEAR ANOTHER BRICK FROM THE WALL!