October 27, New York, NY – Over 30 New York human rights advocates protested outside the performance of Israeli musician Idan Raichel at the Beacon Theatre this evening, calling Raichel “a self-proclaimed propagandist for the Israeli government” and its brutal, apartheid policies towards the Palestinian people. The peaceful, spirited protest of chanting and singing was met by hostility and racism from many concert-goers.

A number of Raichel’s fans began shouting obscenities and making vulgar gestures at the protesters, in two cases mocking the religious garb (video) some Muslim women wear (the headscarf, or hijab). One aggressive male fan repeatedly told a female protest chant leader, “You should die!” Another went out of his way to walk up to two female protesters and toss a lit cigarette between them. In contrast, one passer-by read an explanatory flier and then joined the protesters, adding her voice to chants such as, “Voice of peace? That’s a lie! Idan plays while people die,” and “Musicians must take a stand, no excuse for stealing land.” 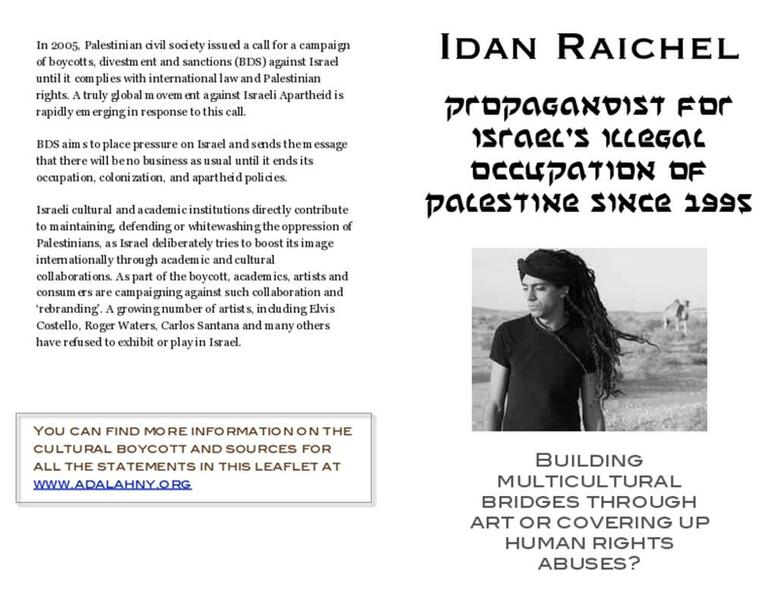 From a family with East European roots, Idan Raichel, until recently dreadlocked, describes his breakthrough 2003 hit, Bo’ee, as “exotic,” with “a haunting chorus in the Ethiopian language of Amharic.” In 2011, Idan Raichel collaborated with India Arie on the song Gift of Acceptance and wrote the following lyrics: “We can debate till the end of time who’s wrong and who is right, Or I can honor your choices and you can honor mine … Give the world a present, give the gift of your acceptance." Raichel calls his music “global fusion,” developed from “cross cultural collaborations,” and cultivates an image of a representative of “tolerant, multi-ethnic Israel.” Yet Raichel’s actions and statements contradict his presentation as a tolerant, peaceful artist who transcends national boundaries and is respectful of others’ cultures.

“We certainly see ourselves as ambassadors of Israel in the world, cultural ambassadors, hasbara ambassadors, also in regards to the political conflict.”

Idan Raichel went on a 2012 tour of Africa initiated and produced by the Israeli Foreign Ministry and Israeli embassies in Africa. According to Avi Granot, head of the Foreign ministry’s Africa Division, “The goal in sending Raichel to Africa was to present Israeli culture at its best.” In a 2008 interview, Raichel proudly acknowledged (translation): “We certainly see ourselves as ambassadors of Israel in the world, cultural ambassadors, hasbara ambassadors, also in regards to the political conflict.” Israel’s consul general for the Pacific Northwest Dr. Andy David recently affirmed Raichel’s role, saying: “I think Idan is maybe the best ambassador that Israel has through his music and inclusiveness.”

In a 2011 interview, Raichel stated, “At the end of the day, it’s the basic things in life that make it possible. It’s like a chef who cooks at the restaurant and has all the fancy ingredients in the world … I feel that our army is a basic ingredient.” Raichel’s support for the Israeli army is materialized in his endorsement of the organization Thank Israeli Soldiers, which creates “educational programs” and sends care packages to Israeli soldiers. In his personal testimony on the organization’s webpage, Raichel states, “Let us all get together and show our care and warm regard for the IDF troops who guard our country night and day.” Raichel’s celebration of the Israeli army ignores its long record of brutal human rights abuses committed against Palestinians in service of the imposition of an apartheid regime.