Flier, Calls to Conscience: Prison Resistance in Palestine, Guantánamo, the U.S. and Iran 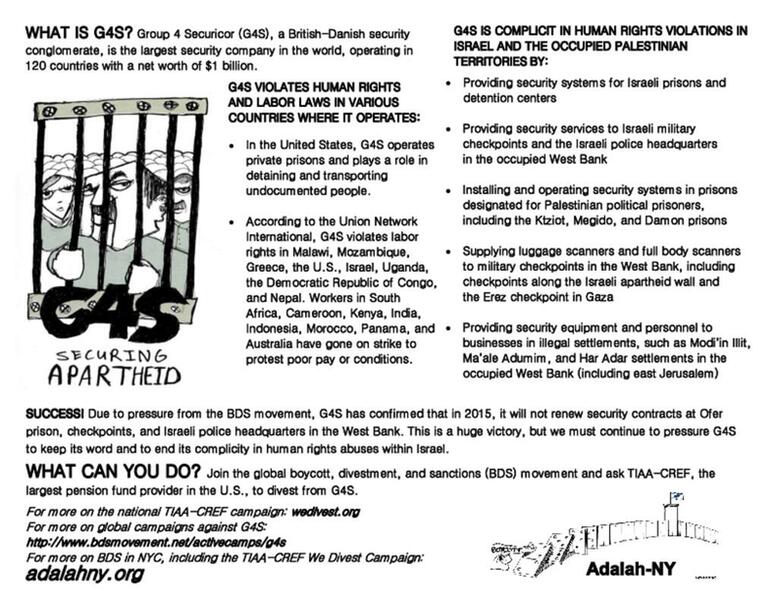 Sponsored by: The Center for Constitutional Rights (CCR), Adalah-NY: The New York Campaign for the Boycott of Israel, and Havaar: Iranian Initiative Against War, Sanctions, and State Repression

Join us for a panel discussion on imprisonment and resistance featuring Sahar Francis, director of the Ramallah-based prisoners' rights organization Addameer (Arabic for "conscience"), in conversation with Samar Mansour (CCR), Victoria Law (author of Resistance Behind Bars), and Asoo (Havaar). Darryl Li (Columbia University Committee on Global Thought) will moderate. This timely panel takes place as Palestinians continue to resist daily sweeping arrests by the Israeli military, the crisis at Guantánamo escalates with the majority of the detained men on their fourth month of hunger strike, U.S.-led economic sanctions compound the repression facing Iranian political prisoners and their families, and communities continue to organize against mass incarceration in the United States.

Panelists will examine each of these regimes of incarceration, reflect on their commonalities and discuss how prisoners and their allies are mobilizing to resist unjust detentions and the silencing of political dissent. Panelists will also address the importance of building principled international solidarity against torture and repression.

SAHAR FRANCIS has since 2006 been the General Director of Ramallah-based Addameer Prisoner Support and Human Rights Association, a Palestinian NGO providing legal and advocacy support to Palestinian political prisoners in Israeli and Palestinian prisons. An attorney by training, she joined the association in 1998, first as a human rights lawyer, then as head of the Legal Unit. With over sixteen years of human rights experience, including human rights counseling and representation, Ms. Francis also sits on the Board of Defence for Children International - Palestine Section.

SAMAR MANSOUR is Advocacy Program Manager at the Center for Constitutional Rights, where she works towards a just closure of Guantánamo, resettlement for the men still detained, and against illegal detentions more broadly. Samar also works to secure accountability for torture and other crimes. The Center for Constitutional Rights has led the legal battle over Guantánamo for the last 11 years.

VICTORIA LAW is a writer, photographer, and mother. She is a co-founder of Books Through Bars-NYC and the editor of Tenacious: Art & Writings from Women in Prison as well as the author of Resistance Behind Bars: The Struggles Of Incarcerated Women (winner of the 2009 PASS Award). She has worked with WORTH (Women on the Rise Telling HerStory) to launch their Birthing Behind Bars campaign, which utilizes women's stories of pregnancy and birth behind bars to push for reproductive justice in prisons.

ASOO is a member of Havaar: Iranian Initiative Against War, Sanctions and State Repression, where she works in solidarity with the Iranian people's struggle against both domestic state repression and foreign intervention. She is one of the organizers of Havaar's new campaign against U.S.-led sanctions against Iran. Asoo grew up in Iran, and came to the United States for graduate school in the Fall of 2008.

DARRYL LI is an anthropologist and lawyer. He works as a researcher at Columbia University.