In this connection, I'd point out again that the PEN America World Voices fest just came off without its traditional sponsorship from Israel. Dropping Israel as a sponsor was, I believe, intentional; though PEN's director Suzanne Nossel was careful not to cop to that. What is undeniable is that PEN came under considerable pressure from Adalah-NY's steady campaign over the sponsorship; and Nossel was receptive to Adalah.

The Palestinian cartoonist Mohammad Saba’aneh kicked off his book tour in New York last night in an appearance at which he said he had no choice but to become a political artist.

Here is the schedule of Saba’aneh’s book tour in the U.S.: You can catch him Friday night in Brooklyn, Saturday night in Clifton, New Jersey, and Monday in Long Island.

An Israeli government representative slammed the BDS movement on Friday for falsely implying that a prominent US literary society had decided to boycott the Jewish state.

Shimon Mercer-Wood — spokesman and consul for media affairs at the Consulate General of Israel in New York — was referring to an Adalah-NY press release that heralded the lack of Israeli government funding for PEN America’s 2017 World Voices Festival — an annual New York event that Israel had been a sponsor of in recent years.

After appeal by leading writers, major US literary festival will proceed without Israeli government sponsorship 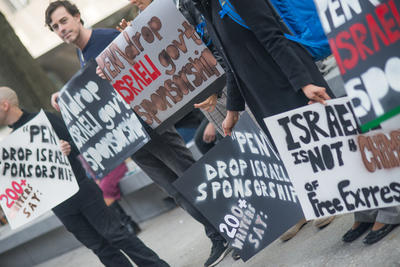 The decision followed a campaign and a call supported by leading literary figures asking the organization to reject Israeli government sponsorship. PEN America accepted Israeli government support for the World Voices Festival four of the previous five years, and despite writers’ opposition in 2016. The leading US free expression and literary organization announced its program last week for the May 2017 World Voices Festival in New York.

PEN America did not, however, offer a reason for the absence of Israeli government support for World Voices in a February 2017 email exchange with Adalah-NY and Jewish Voice for Peace (JVP).

PEN America is no longer accepting funding from the Israeli government, after five years of accepting such sponsorship for the literary group’s annual World Voices festival in New York, the activist group Adalah-NY has learned.

PEN America came under heavy criticism last year for accepting funding from the Israeli government, which jails Palestinian journalists and writers in Israel and the occupied West Bank for their work.

The PEN American Center accepted funding from the government of Israel for its 2016 World Voices Festival.

We believe it is wrong for PEN American Center to accept such funding when PEN International has criticized the Israeli government for "the killings and the reported deliberate targeting of certain journalists, media organizations, and their infrastructures” and “the practice of administrative detention against journalists and other writers."

PEN American Center is an institution with the stated aim of defending writers' freedom of expression.

Palestinian civil society has called on people of conscience around the world to engage in a peaceful campaign of boycott, divestment, and sanctions (BDS), focusing – not on individuals – but on the Israeli government and complicit companies and institutions.

OVER 200 WRITERS have already called on PEN American Center to reject cultural sponsorship from the Israeli government, asserting that such partnership amounts to a tacit endorsement of Israel’s systematic violations of international law & human rights.

Today, we continue that call.

Inside the New-Look PEN America

In 2016, Adalah-NY, a grassroots organization arguing for a boycott of Israel due to what it sees as an apartheid regime “founded as a Jewish state on land ethnically cleansed of its indigenous Palestinian population,” criticized PEN for accepting Israeli sponsorship for its World Voices Festival this past May. (Nossel said PEN has been receiving “minor”support from Israel since roughly 2006, before she took charge.)

Israeli government threats against the well-being and freedom of expression of Palestinian civil society leaders who organize for a boycott of Israel have pre-occupied human rights organizations and made headlines in recent weeks. Simultaneously, the Israeli government is escalating attacks on Palestinian writers. It is currently detaining 19 journalists and a poet.