October 27, 2014 – The Israeli newspaper Yedioth Ahronoth reported today (article in English) that representatives from Africa Israel (AI) and its construction subsidiary Danya Cebus, targets of the Boycott, Divestment and Sanctions (BDS) movement, say they will stop building Israeli settlements in the Occupied Palestinian Territories, including in Jewish settlements in East Jerusalem. Yedioth Ahronoth reported that protests against settlement construction beyond the Green Line were among the main reasons for AI’s decision. The Israeli newspaper cited Africa Israel’s past construction the settlements of Har Homa, Gilo, Ma'aleh Adumim, Ariel, and Mattityahu East. However, Adalah-NY believes that this announcement - undoubtedly the result of seven years of pressure generated by Adalah-NY and allied groups worldwide and a sign of the growing strength of the BDS movement - should be greeted with vigilance because Africa Israel has in the past made similar statements that proved to be untrue.

In fact, according to the Israeli watchdog group Who Profits, “In October 2010, in an official letter to Who Profits, Africa-Israel stated: ‘Neither the company nor any of its subsidiaries and/or other companies controlled by the company are presently involved in or has any plans for future involvement in development, construction or building of real estate in settlements in the West Bank.’ However, the company soon after received a 78 million shekel contract to construct the C-Jerusalem project in the settlement neighborhood of Gilo in East Jerusalem.”

In November 21 and December 8 letters, a coalition of US and UK human rights groups, including Adalah-NY, CODEPINK: Women for Peace and Jewish Voice for Peace, called on Daphne Guinness, FIT and BCRF to distance themselves from Leviev. The groups cited Leviev’s companies’ development of Israeli settlements in violation of international law, and involvement in human rights abuses and unethical business practices in the diamond industry in Angola and Namibia.

In the name of God, the Most Merciful, the Most Compassionate


To the Khadra Family:

May peace and God’s mercy be upon you. We in the villages of Jayyous and Bil’in, who are confronting a Zionist colonizing campaign championed by the wealthy Israeli businessman Lev Leviev, bring to your attention that your son Arif Jihad Muhammad Ibn Khadra, who lives in Dubai, effectively contributes to the campaign against our villages and aids the Israeli occupation via his relations with the settlement builder Leviev and his selling of Leviev’s jewelry in Dubai.

Leviev also supports the Land Redemption Fund, known for the strong-arm tactics it employs to obtain Palestinian land, and the extremist settlement movement Gush Emunim.3 UNICEF and Oxfam International have announced that they will refuse any donations from Leviev because of his settlement activities in Palestine and his unethical practices in Angola and Namibia and New York.4

Leviev is considered one of the leaders of the global diamond industry. His empire consists of a number of diamond and gem companies under Lev Leviev Diamonds.5 In April 14, 2008, Leviev announced that he would open two branches of his Leviev jewelry chain in Dubai, in addition to the stores owned by your son under the name Levant, through which Leviev continues to market his jewelry as a “store within a store.”6

The partnership between your son and the Zionist settlement builder is certain; and about this there is no room for doubt. In March 2008, Thierry Chaunu, President of Lev Leviev Diamonds, attended the opening of your son’s store in the Qasr Hotel and exhibited a new collection of jewelry of jewelry by Leviev.7 This was two weeks after Leviev made public remarks about his support for the settlements. It is disgraceful and shameful that, while Leviev sees no problems building in the occupied territories “as long as Israel issues legal permits to do so,”8 your son, Arif Bin Khadra has stated that “he had heard of Leviev's practices in the West Bank but had seen no proof of the allegations” and that these allegations are not a source of principal concern in that “such questions are not asked in the diamond business.”9 He is aware of the letter sent by the families of Jayyous to Dubai urging that Leviev be denied practicing his business there. In response to this, Arif Bin Khadra said that Dubai is an international and unpoliticized city and needs international brands such as Leviev’s and “What we have learned here [Dubai] is that you don't have to talk about politics or religion if you're doing business.”10

Your son and the settlement builder, Leviev, have not denied their partnership. Their websites link Levant’s stores with Leviev’s as one chain.11 It is important to note that until now the international campaign to boycott Leviev had succeeded in preventing Leviev from opening stores in his name in Dubai.12 However, this month, and only through the efforts of your son, Leviev will be opening one of his stores in Hotel Atlantis under the name “Levant.” It is shameful that the campaign by Palestinian and Jewish activists working to bar Leviev from entering Dubai’s markets to increase his profits and from building additional settlements is being undermined by your son, who spares no effort to facilitate Leviev’s access to reach consumers in Dubai. Attached to this letter are photos taken from the internet that prove your son’s involvement in the diamond trade with Leviev through the Levant stores that are owned by him in Dubai.

The dealings of your son, Arif Bin Khadra, with the Zionist settlement builder, Leviev, betrays the Palestinian cause and is an insult to the sacrifices and pain of our people, and is a mark of shame on the foreheads of every Palestinian. We recognize that you are one of the elites of this nation, and you have offered and continue to offer much to the Palestinian struggle. As such, we request that you take a firm stand against your son’s betrayal of our people and against working in the service of the occupier that violates the rights of his people and appropriates their land. We trust that you will not betray our hopes.

Abdallah Abu Rahmeh, Coordinator of the Popular Committee Against the Wall and Settlements in Bil’in, Occupied Palestine.

To view the PDF of the original letter (in Arabic), click here.

Letter from villages of Bil'in and Jayyous to the Khadra family re. Leviev's business relationship with Arif bin Khadra 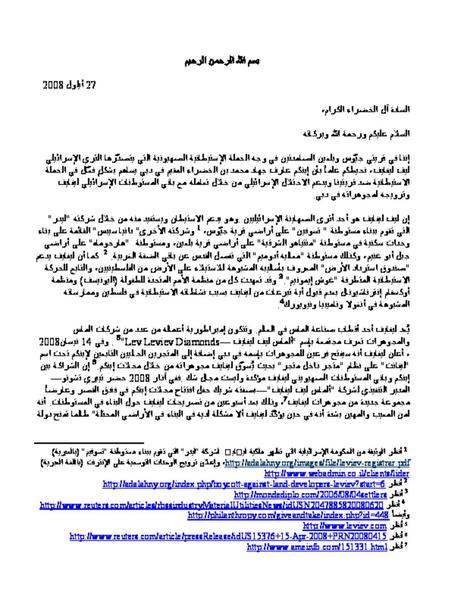