Chants and Songs from Protest Batsheva for Israeli Apartheid Week 2019 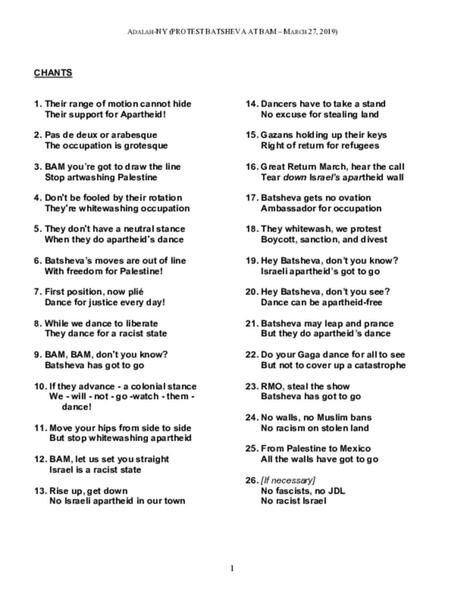 Should Companies Be Blamed for the Policies of the Governments That Support Them?

But why target a dance company? What does Batsheva have to do with Israel's geopolitical conflicts? The protestors, who tend to be locally organized members of the larger Boycott, Divestment and Sanctions (BDS) movement against Israel, see Batsheva as a tool of the Israeli government's efforts to distract from political controversies, such as the building of Jewish settlements in the West Bank.

On March 27, just days before the one-year anniversary of Gaza’s Great March of Return, Batsheva Dance Company will be performing in NYC as a willing participant in the Israeli government’s Brand Israel public relations campaign that uses art and culture to divert attention from Israel’s violent repression of the Palestinian people, including Israel’s war crimes and crimes against Palestinian protesters in Gaza.

Video from our Batsheva Dance Company action at BAM, Feb 4, 2017

Despite fawning praise in press, Batsheva receives a cold welcome in Brooklyn for complicity in occupation

As the Batsheva Dance Company winds its way across North America, the media has clamored to laud the show on its artistic merits, glossing over the political implications of the group’s visit. Articles in The New York Times, The Los Angeles Times and The Chicago Tribune offer timid critiques of the show but fail to mention politics altogether.

But the irony of showcasing uninhibited movement on stage as a product of a country where the every movement of the occupied Palestinians is restricted was not lost on the hundred or so protestors outside BAM on opening night of “Last Work.”

The yelling and cheering could be heard more than a block away from the Brooklyn Academy of Music on Saturday evening. For an hour and a half before Batsheva Dance Company performed at BAM’s Howard Gilman Opera House, protesters gathered in support of a cultural boycott of Israel, part of the larger Boycott, Divestment, Sanctions (BDS) movement against the country. The protesters’ signs, held high around a Palestinian flag waving in the frigid wind, featured slogans like “Don’t dance around apartheid” and “Batsheva proud ambassador of racism.” 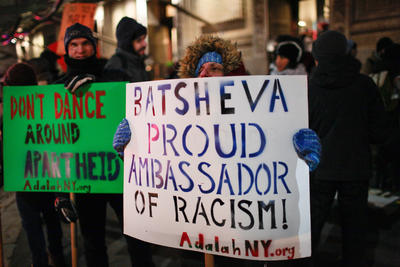 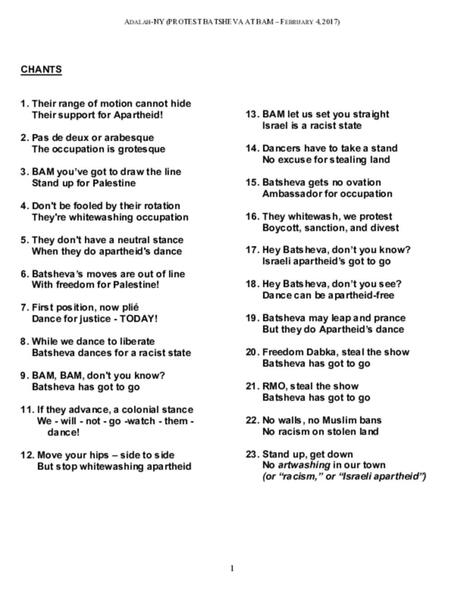