The New York Society for Ethical Culture (NYSEC/Ethical NYC) is hosting a November 14 concert by Idan Raichel, a cultural ambassador for the state of Israel. Raichel has a long, documented history of proudly collaborating with, promoting and defending Israel’s repressive government and its brutal occupying army. Raichel’s actions support the Israeli government’s Brand Israel public relations campaign, which uses art and music to distract from Israel’s systematic repression of the Palestinian people.

Seven New York City groups wrote to NYSEC on October 18 calling on the organization not to host Raichel’s concert (letter below), because doing so promotes the whitewashing of Israel’s government and army, and hosting the event cannot be reconciled with NYSEC’s mission of working for social justice, and creating a better world.

1.    NYSEC can’t claim it promotes justice while hosting events that further Israel’s repression of Palestinians. The organization is responsible for the impacts of events in its spaces.

2.    The Israeli government and Idan Raichel are both highlighting NYSEC’s name to legitimize their agenda of continued subjugation of the Palestinian people.

3.    The only way NYSEC can uphold its core commitment to social justice is to cancel Idan Raichel’s concert at NYSEC. 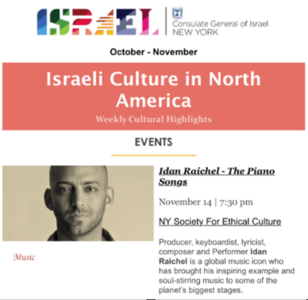 We are writing as groups committed to human rights and social justice to call on The New York Society for Ethical Culture to cancel the November 14 concert by Idan Raichel that you are hosting. Though Idan Raichel cultivates the image of being welcoming of other peoples and cultures, he calls himself a cultural ambassador for Israel, and in that role he has consistently and proudly collaborated with, promoted and defended Israel’s repressive government and its brutal occupying army.

Providing a public platform that legitimizes a musician with a deep and active commitment to a government and army that are responsible for the violent subjugation of the Palestinian people cannot be reconciled with the New York Society for Ethical Culture’s mission of working for social justice, encouraging respect for humanity, and creating a better world.

Raichel’s actions support the Israeli government’s Brand Israel public relations campaign, which uses art and music to distract from Israel’s military occupation of the West Bank and Gaza Strip, systematic discrimination against Israel’s Palestinian citizens, and denial of Palestinian refugees’ right of return, which is guaranteed under international law. An Israeli government official explained the role that cultural ambassadors like Raichel play under Brand Israel, saying, “We will send well-known novelists and writers overseas, theater companies, exhibits … This way you show Israel’s prettier face, so we are not thought of purely in the context of war.”

Confirming his value to the state, an official with Israel’s Ministry of Foreign Affairs said of Raichel, “I think Idan is maybe the best ambassador that Israel has.” Raichel has said, “I believe that our role as artists is to enlist in the Israeli propaganda campaign [Hasbara].”

Performing that role just this May, amidst controversy over the Eurovision song contest hosted by Israel, in which Raichel was scheduled to perform, Raichel gushed to a reporter, “[Israel] is just the best place in the world … Don’t hear all the fake news, and all these things, conflicts and stuff… Come here. It’s the best place on earth.”  Raichel said this as Israeli snipers were gunning down Palestinians trapped in the open-air prison of the Gaza Strip who are peacefully protesting every Friday for their basic rights. Israeli soldiers have killed over 200 Palestinian protesters in Gaza to date, and maimed thousands more.

Raichel’s support of and collaboration with Israel’s government is longstanding. As examples, he is part of a Ministry of Education program to combat criticism of Israel. He played for Israel’s Ambassador in Montreal in March, and toured Argentina for Israel’s Embassy there in 2018. His 2017 tour of Europe and the US was promoted by Israeli government officials. In 2016 Raichel headlined the Israeli Consulate’s Israeli Independence Day celebration in NYC. His 2014 tour of Africa was organized by Israel’s Ministry of Foreign Affairs.

In a statement endorsing the right-wing US non-profit Thank Israeli Soldiers, Raichel said that supporting Israeli soldiers “is a fulfillment of the Jewish ideal.” Raichel regularly plays concerts for Israeli soldiers, including in 2009, 2013, 2014 and 2015. Arriving in the US after Israel’s August 2014 attack on Gaza, which killed over 2100 Palestinians, including 500 children, he immediately attended a gala fundraiser for Israel’s military.

Idan Raichel’s much-promoted collaborations with performers from other cultures takes a back seat to his commitment to uncritically defending the Israeli government and army, and their systematic repression of the Palestinian people.

We call on you to uphold your core commitment to social justice, respect the Palestinian boycott call, and cancel Idan Raichel’s performance. We would welcome the opportunity to meet to discuss these issues with you in greater depth.

Adalah-NY: Campaign for the Boycott of Israel

NYU Students for Justice in Palestine

Students for Justice in Palestine - the New School